I hope not, I hope you all followed me over to wordpress!

Thanks to Bob at How to lower cholesterol naturally for inviting me to guest blog.
Posted by GI Jane at 11:55 AM 1 comment: Links to this post

I wrote it! But you have to read it over HERE on wordpress. I've moved! Hope to see you over there!
Posted by GI Jane at 3:07 PM No comments: Links to this post 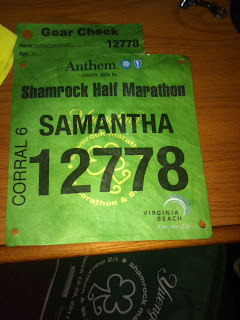 Tomorrow's race day!My first ever half marathon! EEK! The swag is pretty sweet and a decent expo. Full review to follow!
Posted by GI Jane at 2:25 PM 2 comments: Links to this post

I flew into North Carolina late last night and was picked up the beautiful and amazing Em from A life to Bragg about.  I was super drunk tired since it was about midnight so we headed to her house and crashed. This morning she made me breakfast of kale, spinach, onion, bacon and eggs. Sort of a scrambler. AH-MAZING. I'm sure she'll post pics, probably tomorrow.

Then she whipped my booty gave me a light workout. We warmed up on Jacob's Ladder.  That thing kills! 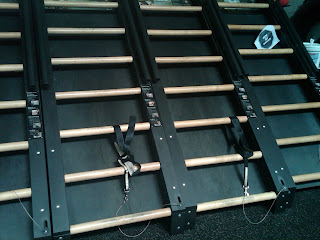 We did some squats and dead lifts.  I'm sure she'll post a full list of the workout since I just kind of mimicked what she did. Heh.   We finished by pushing the "sled" around a bit and cooled down on the rowing machine. 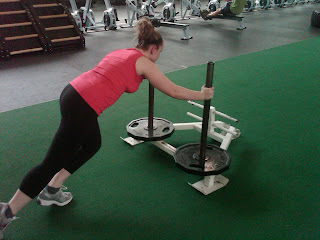 Then she took me to a super awesome all natural and organic restaurant. It's called the Fresh Cafe and if you are ever in  Fayetteville, NC, make sure to stop by. The staff was super friendly and awesome.  We started with some fresh veggies(carrots, cucumbers, celery) and cayenne hummus.  Then I had the spiced Bulgar and black bean taco salad, minus the tortilla chips. It was SO good, it was spicy without being over whelming.  Super filling, I only ate half and brought the rest back which Em and I just finished eating. She had a roast beef quiche and crab soup which she annihilated!  Plus a cup of their organic black coffee and I was set. 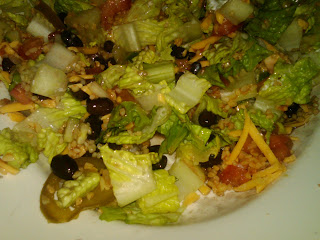 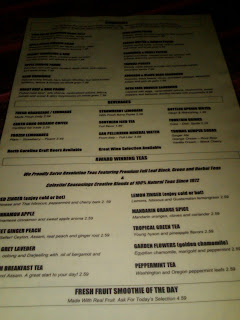 Needless to say, I'm whopped and it's time for me to go to bed. We're heading up to VA beach tomorrow to pick up our packets and prepare for race day! I can't believe it's here! For those of you who are new we're running the Anthem Shamrock Half Marathon in VA Beach.  And it's sponsored by Yuengling ;) Which is why we picked this race, too bad Em can't partake in the adult beverages, but at least she'll be there with me! Toodles!
Posted by GI Jane at 8:13 PM No comments: Links to this post


Original title right? But I'm going to make this post useful by giving you some facts and history of why we celebrate this day and who Saint Patrick was.

- Saint Patrick was a pagan, a lot of people were pagans back in the day.
- Later in life he converted to Christianity and become a preacher and missionary for the Catholic church.
- He traveled Ireland ridding towns of the excessive amounts of snakes. This is why Pagans will wear a snake symbol today.
- When he began his mission to spread the word of God, he used the shamrock as a teaching tool. He used the 3 leaf clover to display the Trinity. The Father, Son, and Holy Spirit. This is why it's a symbol we use today.
- March 17th is the date that Saint Patrick passed away.  We party today to celebrate his life and how he changed so many peoples lives. How he spread the good word of the Lord and helped convert many non-believers into Christians.
- Wearing green came from a division in religions in Ireland and the colors of the flag.  The Irish Catholics wore green, Protestants wore orange. The non-believers or neutral parties would wear white.
I am part Irish but it's a part of me that I find interesting. My family is Catholic but my immediate family switched to the Lutheran church so I still feel a strong tie to Catholicism(hence why I don't eat meat on Fridays during Lent).
So there's a little history lesson for you.  Take a second today to remember why we really celebrate today.  Even though really it's just another excuse for Americans to drink(similar to Cinco De Mayo).  Even if you're not Irish he still was a Christian and man of God and that's reason enough to celebrate.

Posted by GI Jane at 8:08 AM No comments: Links to this post * Run a half marathon

* Keep up strength and cross training, don't get taken over by running

* Spend more time on me and bettering myself

* Get my green belt in Judo

* FINISH MY ASSOCIATES( 8 classes away)

* Pay off debt (Jeep you're lucky I love you)

* Freshen up on my Spanish

* Find a career/path to stick to

* Stay on top of cleaning the house, as opposed to letting it all pile up and doing a "deep clean" on weekends

* Eat out only once(ok, twice) a week

* Meet my BFF at the gym at least once a week

* Try barefoot running in between half training